Action-Roguelike Noita takes its physics sandbox out of Early Access

XIII Remake shows its arsenal of destruction in new trailer

The distinct fares of Morocco, Libya, Algeria, Tunisia, and Egypt are being reimagined for U.S. menus.

For too long, North African food has been overshadowed in the United States by trendy Mediterranean and Middle Eastern cuisines. Now, the bold flavors and savory dishes from Morocco, Algeria, Tunisia, Libya, and Egypt are finally getting the attention they deserve.

While preserved lemons, pomegranates, and oil-cured olives continue to accent fine dining menus, a creative look at North African traditions is bringing upscaled falafel, housemade couscous, and reimagined tagine stews to the table, too. Egyptian flatbreads can be found on a New American menu in Boston, Moroccan Sloppy Joes are dished out from a food truck in Minneapolis, dukkah-spiced hazelnuts top a chocolate cake in Manhattan, and harissa-honey chicken wings are becoming a gastropub standard.

Harissa as a Gateway

There’s perhaps no better indication of the region’s influence on the American table than the rise of that fiery chile paste and condiment from Tunisia, harissa, which lately has gone head-to-head in the hot sauce category against Thai Sriracha and Korean gojunchang.

Dr. Jessica Harris, Professor Emerita at Queens College CUNY, New York, and author of The Africa Cookbook: Tastes of a Continent, says she always keeps a tube of the traditional flavor agent in her cabinet, both for cooking and as a condiment. As an expert on African foodways, she has a deep appreciation for it, but notes there’s much more to North African cuisine than harissa.

“It’s a lot more diverse and complex—and frankly a lot more interesting—than we might expect,” she says.

Nearly 700 years of Moorish rule and influence left its mark on the Mediterranean, just as France, Spain, and Italy brought culinary and agricultural traditions to Western North Africa. On the northeastern front of the continent, Egypt offers one of the world’s oldest cuisines and one that has had a long dialogue with the Middle East. Berber communities, nomadic tribes, and of course African neighbors to the south, have also contributed to the diverse culinary history found throughout North Africa. “These regions have been in touch for virtually millennia and have influenced each other,” Harris says. “They are interwoven.”

Each North African country offers a distinctive cuisine, and American intrigue in global food is part of what’s driving interest, says Harris. “We are grazing the world,” she continues.

Culinary professor Hinnerk von Bargen calls North African cuisine a new food frontier for Americans. He teaches the cuisine as part of the Mediterranean course at The Culinary Institute of America in San Antonio and says students are captivated by the flavors and cooking techniques, though he recognizes that he’s giving them only a small taste of what the region has to offer. “Talking about North African cuisine is like talking about European cuisine. The countries have cuisine commonalities and common characteristics, but the food varies tremendously,” he says. “Many dishes have a sweet element to them, either as part of the dish or in a condiment.”

Indeed, it’s that satisfying balance of sweet and savory flavors found in dishes like Morocco’s well-known lamb and prune stew that has become iconic to the region. “The unifying elements across North Africa are olive oil, lemons, olives, wheat, goat, lamb, and dried fruits,” he says. Nuts, figs, dates, prunes, and apricots make regular appearances in savory dishes; legumes like chickpeas, fava beans, and lentils form the base for prized dishes; and wheat bread is a daily staple, often as quick-cooking flatbreads. 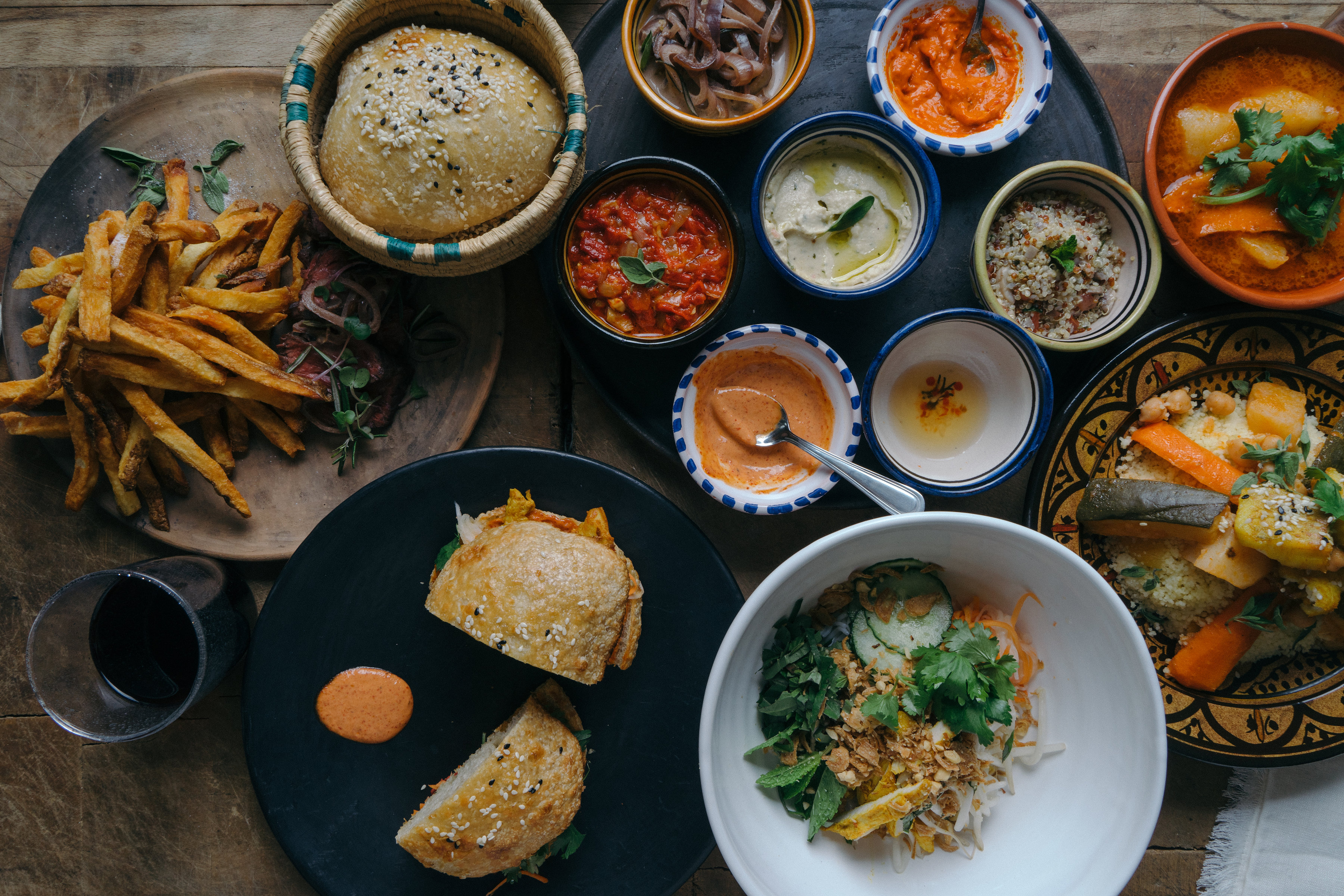 According to von Bargen, cooking techniques found in North Africa preserve energy and water, with dishes like couscous (a semolina pasta) cooked with the resulting steam from a simmering stew rather than in a pot of boiling water. Charcoal grills used for meats—like lamb and goat and others that thrive in arid lands—are unique to the region, built narrowly to conserve on fuel. Fish, especially tuna, is important to the vast coastal areas, and pigeon is used to make dishes like b’stilla, a savory pie. “One-pot dishes are big, too” he says, noting that the comforting “tagine” stews are named for the earthenware pot they’re cooked in.

“Tunisian is significantly spicier than Moroccan cuisine,” he says, “and Morocco is famous for its spice mixes.” Ras al hanout, a cumin-heavy blend, varies by brand and chef. “It’s the North African counterpart to curry powder,” explains von Bargen. Tabil, a staple spice mix popular in Tunisia and Algeria, is made with coriander, caraway, and chile powder, while baharat, a warm, all-purpose Middle Eastern spice blend popular in Egypt is made with loads of black pepper, cumin, coriander, and cloves.

Street foods like savory brik pastries, meat kebabs such as kofte and shwarma, and hearty dishes like Egypt’s kosheri (a lentil and rice dish) are part of everyday life. Small plates for sharing, like babaganoush eggplant dip, are common restaurant fare. And of course, there’s Morocco’s famous mint tea. “It grows all over the place,” says von Bargen.

Brooklyn, N.Y.-based Simple Cafe chef/owner Samia Behaya was born and raised in France by first generation Algerian parents, and says that North African cuisine, for her, is rooted in tradition and culture. “I wanted to create a place that is real and authentic to what it was like cooking from my parents’ home.”

Algeria is such a unique place and it stands out from other North African countries because of our rich history. Whether it is because we were colonized by the French, or the way Algerian cuisine is influenced by various other cultures such as Berber and Arabic, it is that variety and diversity of culture that blends into the way we approach making food.” 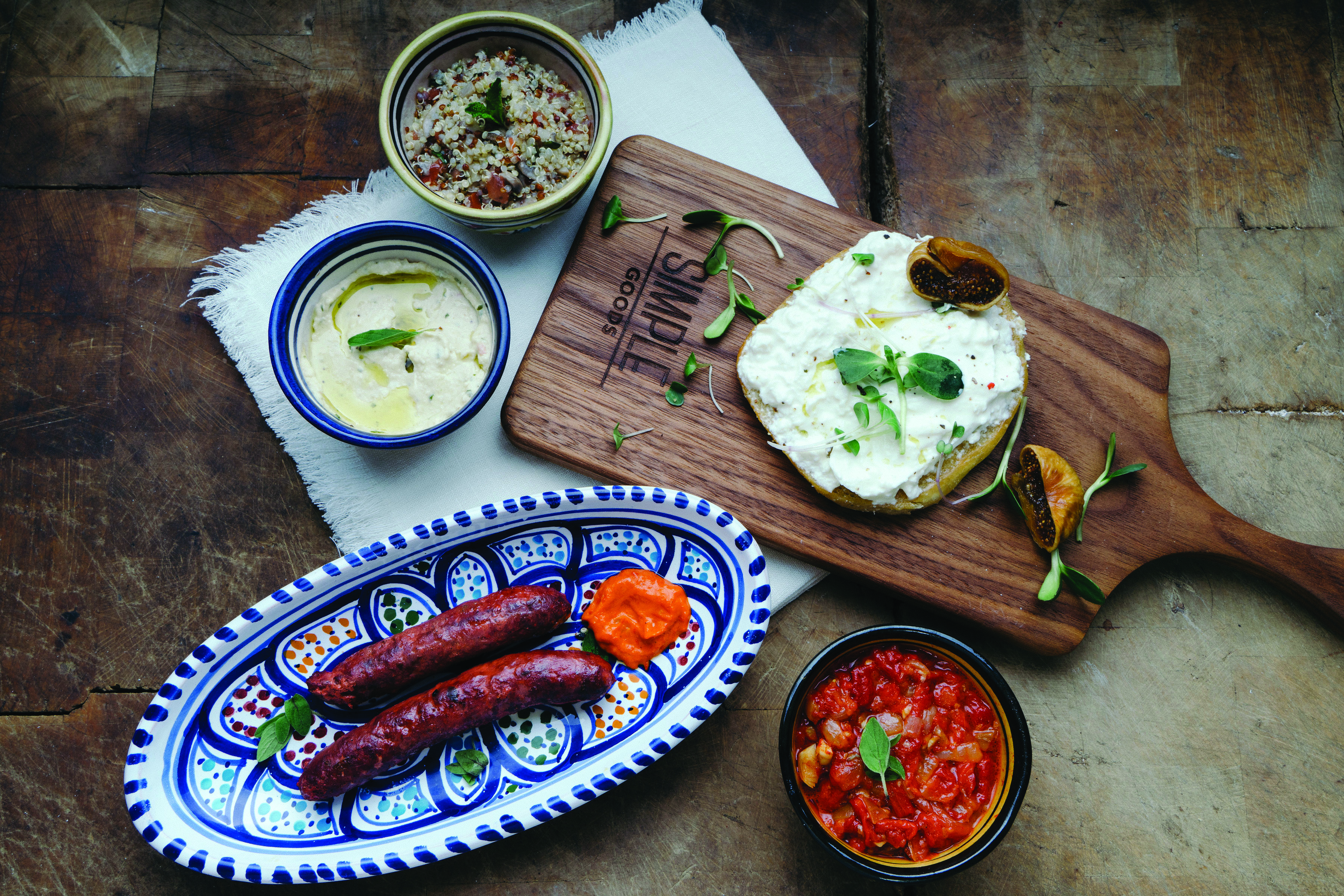 First-time customers often mistake her menus for Moroccan food, but she’s happy to play the role of chef-educator. “Couscous, tagine, and tchoutouka—with their full flavors and North African colors—have become much more mainstream,” she notes.

At Simple Cafe, Behaya serves babaganoush, and a vegetable and chickpea tagine with couscous alongside creative dishes like cumin fries and a Vietnamese-style Bánh mì sandwich made with merguez lamb sausage. At her other restaurant, LOT45, there’s Algerian boreck (a flaky pastry with seasonal fillings), steak frites, and Bluepoint oysters with harissa cocktail sauce.

Chef Lior Lev Sercarz, spice blender to some of the world’s top chefs, recently created a custom dukkah spice blend for Chef Michael Mina’s namesake restaurant that speaks to Mina’s Egyptian heritage. “Egypt has more influences from the Middle East than you would see in central or western North Africa,” says Lev Sercarz. “The reality is that each country is so different from one another. They’re all in North Africa but the dishes and cooking methods are different.”

Lev Sercarz explains that one of the defining features that sets North Africa apart from the cuisines of neighboring Mediterranean and Middle Eastern countries is how they use spices, which can be attributed to the influence of age-old trade routes.

“Ras al hanout, harissa, and dukkah are all pretty popular nowadays. They’ve been growing the past three to five years,” he says. “They often share a mix between the sweet and savory—sweet from spices, not sugar.” Fragrant spices like rose petals, orange blossoms, cinnamon, cardamom, and cloves are often combined with savory cumin, caraway, and chiles. “Tagine spice blends are common in North Africa and a sign of personal culinary style, as each one is different,” he says.

At La Boîte, Lev Sercarz’s destination spice shop in Manhattan, his own Marrakesh spice blend captures that iconic sweet-savory profile with a blend of cumin, cinnamon, thyme, and other spices, and is perfect for flavoring skewered meat or couscous. The Tangier blend—the chef’s play on ras el hanout—has a warm and floral note thanks to rose petals, cinnamon, and cardamom. Izak is a low-heat, harissa-inspired dry blend that’s great on many foods, even pizza.

The Sheba spice blend is Lev Sercarz’s interpretation of Ethiopia’s traditional berbere mix, which the chef says has also become popular along with the North African spice blends. Interest in African flavors overall, it seems, is growing beyond the geographic borders of the northern region. U.S. companies like Oregon’s Ahara Rasa Ghee, makers of flavored clarified butters sold online and in specialty food stores, created a traditional Ethiopian-style butter product called Niter Kibbeh to offer alongside their creatively flavored ghees. “It was important to us to make this recipe authentic, but also make it our own,” says founder/co-owner Andrea Shuman. Recognizing the culture of clarified butter throughout North Africa and the world, she says they plan to release other ghee-related products, such as a limited run of Moroccan smen, a fermented, flavored butter commonly used in couscous.

When developing their new Kitchen & Love Cauliflower Quick Meals, Cucina & Amore, San Pablo, Calif., looked for special sauces that would both differentiate from existing ready-to-eat meals and complement the mild, nutty, and bitter undertone of cauliflower. “The sauces had to be bold,” says Amanda Lee, the company’s international buyer.

“Millennials are much more willing to take risks and are socially aware of what is trending,” she says. With the Moroccan Vegetable Harissa Cauliflower Quick Meal, she says the hardest part is that harissa can be spicy and some consumers are not risk takers, so they had to design their recipe with only a mild kick of heat. The product has had a great response and in general, they have seen a huge rise in the demand of more international food options such as North African-influenced products.

Anna Klainbaum is a freelance writer specializing in food and beverage.